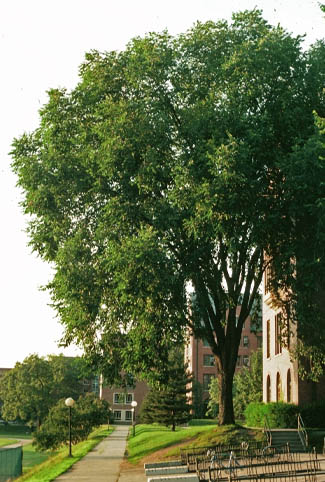 Native to the Eastern United States, the American elm is a medium sized tree reaching heights of 60-80 feet with a spread of around 40 feet. The leaf is 3-5” long and has a coarse, sharply doubly serrated edge. The base of the leaf is noticeably unequal, one side starting further down on the petiole than the other. Small drooping flowers appear in early spring before the buds open. The bark on the American elm is dark gray with flat topped ridges separated by diamond shaped fissures. When cut the bark of the American elm has a alternating white and red color pattern. The bark on young trees feels very spongy. The American elm was once one of the most planted street trees in America, it has a beautiful vase shaped form when mature, however with the introduction of Dutch elm disease these trees are far less common.