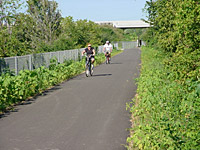 It was in anticipation of the Lima Rotary Club’s 75th anniversary in 1992 that the idea of a “Riverwalk” was conceived. The Rotary Club partnered with the Johnny Appleseed Metro Park District, the City of Lima, BP, and numerous businesses in the community to complete the first phase of corridor development along the Ottawa River. The Rotary Riverwalk was created – a 4.2 mile paved trail extending from from Heritage Park in Shawnee Township northeast to the Collett Street Recreation Area in Lima. 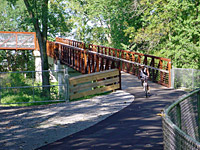 With forward thinking and a vision to improve the community, the City of Lima initiated the Ottawa River Cooridor Study in 1996. The Riverwalk serves the citizens of Lima/Allen County as a safe alternative transportation route to Lima’s central business district, YMCA, and numerous parks, schools and neighborhoods. It connects Heritage Park in Shawnee Township to and through the City of Lima to the Ottawa Metro Park in Bath Township. 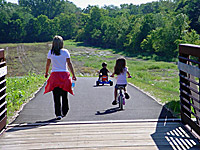 The Riverwalk continues to be a success due to the cooperation and collaboration between the City of Lima, township trustees, the Johnny Appleseed Metropolitan Park District and many private landowners along the way. The “connecting link” was completed & dedicated July 2010.   ROTARY RIVERWALK/OTTAWA RIVER BIKEWAY.pdf

Please use and enjoy your Riverwalk and all of your parks!