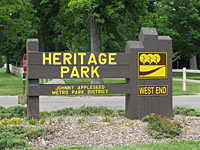 In 1973, the Johnny Appleseed Metropolitan Park District Board accepted a deed for 108 acres of the Lima Army Modification center land from the federal government. An additional 54 acres with the former 108, totaling 162 acres, came to the Park District through application to former President Nixon’s “Legacy of Parks” program. Subsequently, 81 acres of the land was returned to the Lima Army Modification Center for expansion, leaving Heritage Park at its present size of 81 acres.

The land in the area of Heritage Park was the last Shawnee Indian reservation in the State of Ohio, and located on this reservation was the Shawnee council house. The council house was erected in 1790 and was the home of celebrations, funerals, religious ceremonies, and important meetings. This building was the center of the Shawnees’ activities by both the Hog Creek Shawnees and the Wapakoneta Shawnees. The council house stood until 1834 when it was torn down by the Hover family, who then owned the property. The small house and barn located east of the entrance of the West End picnic area was the old Hover farmhouse. The bank barn used to be to the west of the farmhouse, right where the woods begins.

Over the past sixty years, a transition has occurred from field to forest over much of Heritage Park. Currently, the most dominant successional state is the Intermediate Forest to the east of the West End picnic area. As recently as 50 years ago, nearly all of this area was pasture. When the land was allowed to sit undisturbed, grasses and shrubs dominated the landscape. As time passed, fast growing trees were introduced and began to grow and overshadow the grasses and shrubs. As this area continues to mature, the larger, hardier trees, like oaks, ashes, hickories and walnuts will become established and the shrubs and smaller trees, such as elms, cherries and red maples, will die out. As the trees in the forest grow and limit the growth in the understory, a Mature Forest will be the dominant successional state. The West End picnic area, for example, is considered a mature landscape.

Enjoy your hike through the matured forest or your picnic under the hickories and oaks. While you consider how beautiful everything is, just remember, it’s all changing right before your eyes! 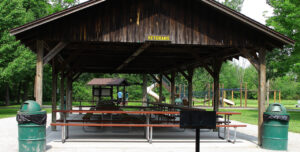 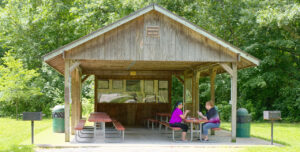 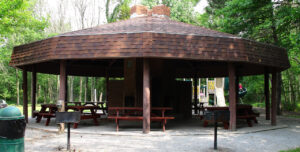 Heritage Park is located in Shawnee Township, south of Lima on Reed Road, between Shawnee Road and South Dixie Highway. The West End picnic address is 2092 Reed Road and the Lions Den address is 1772 Reed Road.