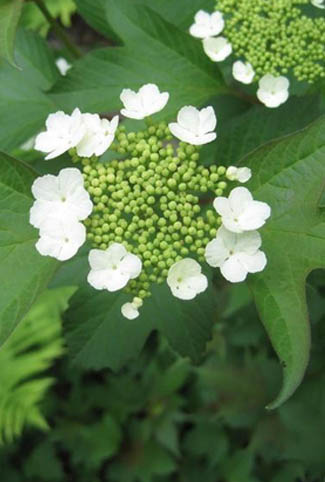 Considered a large and hardy deciduous shrub with a moderate growth rate of up to 3 ft. per year, the plant is typically 8 to 15 feet tall by 8 to 10 feet wide, with arching stems and a very dense, rounded form. The highbush cranberry is actually not a cranberry at all, though its fruit, or ‘drupes’ as they are known taxonomically, strongly resemble cranberries in both appearance and taste. They also mature in the fall, as cranberries do. The two plants are quite different, however. Both are native to North America, but the highbush cranberry is a Viburnum, a member of the Caprifoliaceae, or Honeysuckle family, in contrast to the ‘true,’ or lowbush cranberry, which is a Vaccinium, a member of the Ericaceae—Heather or Heath—family. The leaves resemble a maple leaf but have a more wrinkled appearance. Clusters of showy white flowers appear in June and are replaced by nearly round drupes (drupe: a fleshy fruit with a central stonelike core containing one or more seeds) about 1/3-inch diameter with a single large seed, bright red, juicy and quite acid, like a cranberry. The seeds ripen from August to September. It does not begin to produce fruit until approximately five years of age.
This species is easily confused with the nonnative, less tasty invasive highbush cranberry. With the native americanum form, the petiolar glands at the base of the leaf is described as convex (bulging outward). While the European (opulus) form, whose petiolar glands are concave (either flat on top or slightly dented in appearance), and mostly wider than they are high.