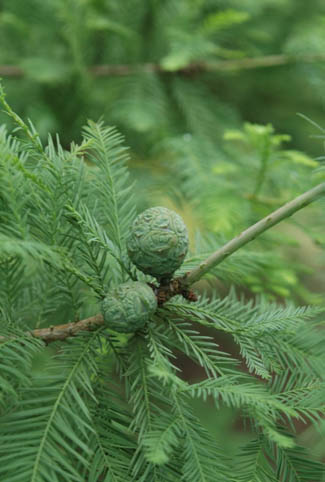 Native to the southern United States up to Indiana the bald cypress reaches heights at maturity of 120’ and a spread of 25’. Like the larch, the bald cypress is another conifer that loses its leaves, hence the name bald. Being a conifer, the bald cypress produces a cone, but it is rarely ever seen because unlike most cones these fall apart readily. The bark is distinctive, being a greyish-red color that has interlacing furrows. Another unusual feature of the bald cypress is the “knees” it produces in wetter environments. These knees develop shallow underground, in many cases underwater, and protrude above the surface to help with air transportation. Bald cypress trees are valued for the rot-resistant heartwood of mature trees, so they have been widely used to make fence posts, doors, flooring, caskets, cabinetry, boats, and more. However, these days they are harvested less for timber because they are slow-growing, and there are less of them than there once were. Bald cypress have very important roles in the wild. Since they tend to grow along rivers and in wetlands, they are excellent at soaking up floodwaters and preventing erosion. They also trap pollutants and prevent them from spreading. Frogs, toads, and salamanders use bald cypress swamps as breeding grounds. Wood ducks nest in hollow trunks, catfish spawn in the submerged hollow logs, and raptors like bald eagles nest in the treetops.