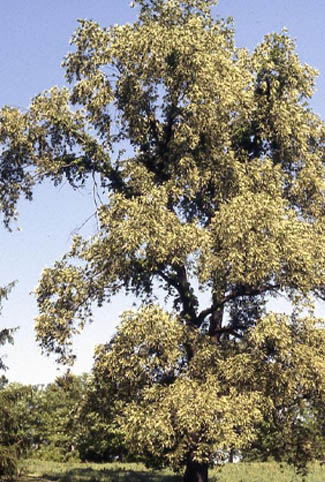 Ranging from southeastern Canada, through the eastern United States, and west to eastern Texas is the most important cherry in its native range. The black cherry can reach up to heights of 110’ when crowded. The leaves on black cherry are lance shaped with a serrated margin. The bark has a very distinctive dark scaly feature like burnt cornflakes. In the spring showy white flowers are held in drooping racemes (when individual flowers are held on a single stem by short, equal stems) after the glossy leaves have emerged. The dark red fruit changes to black from August through October. This is later than most other cherry species, lending to the name serotina or “late ripening”. The fruit is a valuable food for wildlife. While the fruit is edible all other parts of the tree contain cyanide-forming toxic compounds that could be fatal if ingested by humans’ and mammals. The lumber for the black cherry is highly regarded for fine furniture, veneer, etc.