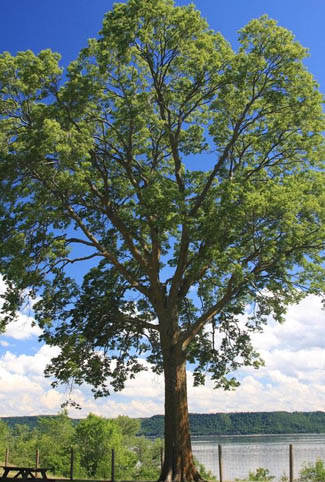 Native east of the Rockies, the hackberry is a large tree with mature heights of 60’ with an equal spread. While not necessarily a showy tree, it is a highly functional tree. It is fast-growing, able to grow up to two feet in a growing year. A member of the elm family, the hackberry has leaves like an elm but the hackberry only has a single serrated margin where the elm has a double. The fruit on the hackberry is also different from other elms, as it produces drupes (a single seed surrounded by a thin fleshy covering). The fruit is edible and tastes like a date. The hackberry has a couple other unsightly features that make it easy to ID. The first is called nipple gull, a harmless gull formed on the leaves by a combination of a mite and a fungus. The other is called witches broom which is a mass of twigs that form a shape like a broom. The bark on the hackberry is often described as an irregular corky pattern. The fruit is readily eaten by several birds including cedar waxwings. The tree also attracts many butterfly species including American snout, hackberry, mourning cloak, and tawny emperor. In earlier years, it’s tough, flexible wood was used for barrel hoops, and pioneers used it to build their cabins with. The tree was first cultivated in 1636.