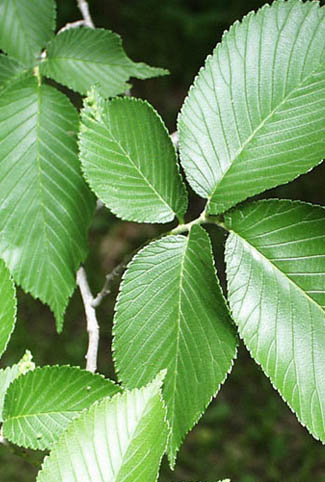 Red elm, or slippery elm is native to the central United States. Red Elm is a medium sized tree reaching 40-60 feet at maturity. The leaves on the red elm are longer than the American elm at 4-8”. I noticeable feature of the red elm leaves is a sand paper like texture. Unlike the American elm flower, the red elm flower is not droopy and instead is more round directly on the twig. The red elm is often called slippery elm because if the inner bark is mucilaginous, meaning it secretes a gelatinous substance when consumed. The bark  is a darker brown to reddish-brown, and with age developing deep irregular furrows (not diamond shape). Like the American Elm, the red elm is also very susceptible to Dutch elm disease.